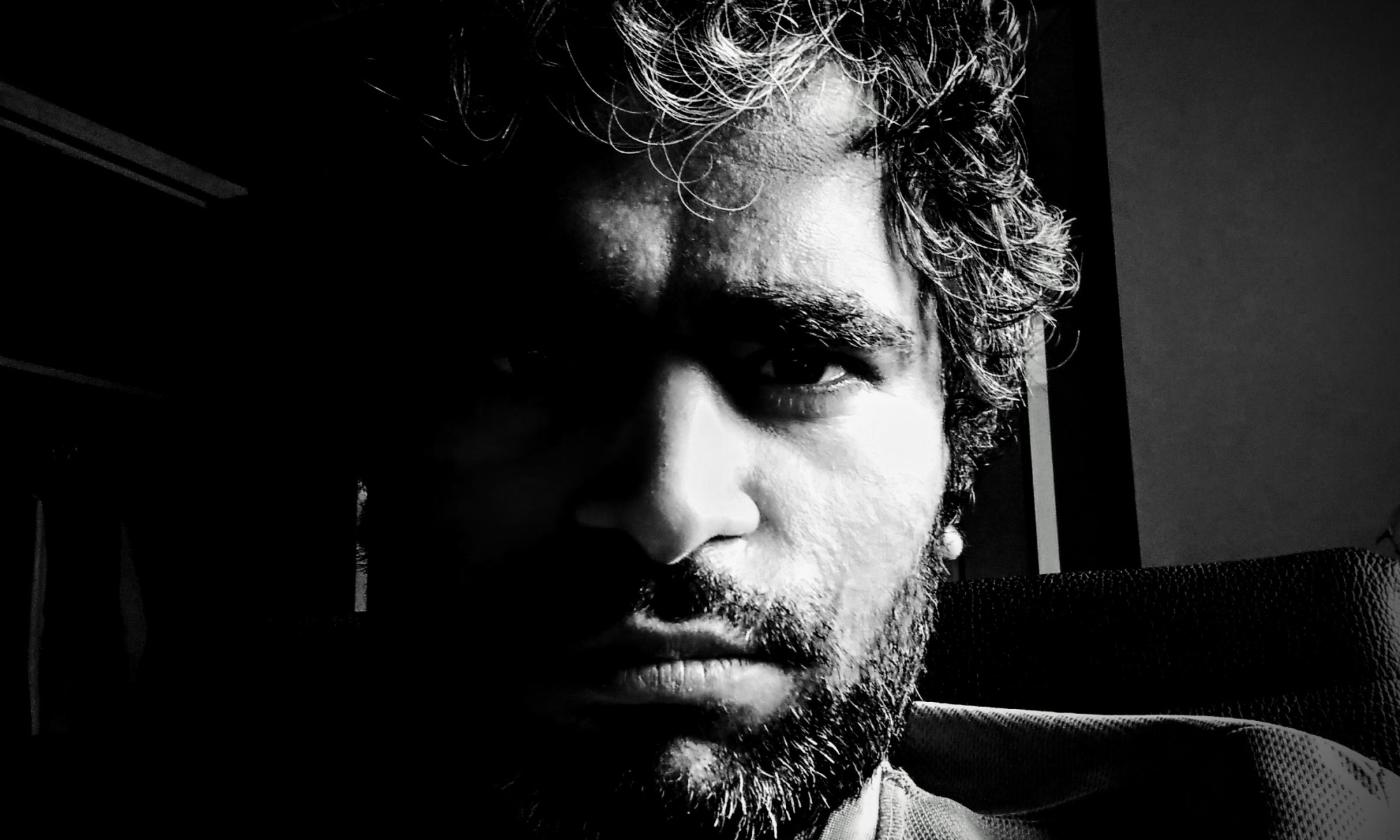 “Gaurav, do it. Go ahead and jump. This is the best solution and it will be over”

“You can. Don’t be a coward! Throw your bag over the fence first. Then you get across and just jump. It’s raging water, falling 200 ft down, on the rocks. In this loud noise and fog, no one will know. Or why bother taking the bag off? Just jump with it. Trust me, that’s the easiest solution.”

“This is not the time to think of all this emotional bullshit. You live, you die – it doesn’t matter. It won’t bother anyone. No one loves you. Your family hates you. You have no friends. People will forget you in a day and it will be over. Here’s nothing for you. Look at this raging blue water, it is free from all relations and emotions, falling down the cliff, free from fear. You are like this water. Free from fear, free from strings. Be brave. Get across the fence, jump and all your worries are over. Trust me, I’m you and I would think of what’s best for you”

I’m staring at this water flowing down to what seems nowhere with tremendous energy in this dense mist of Niagara Falls on the American side of US-Canada Border. It’s been 20 minutes and this conversation in my head has captured all my attention. My legs are shaking. Is this the time to make a decision? Should I listen to this voice in my head? Is he right? Does no one love me? Is this the real solution? What if I listen to these voices? What if I actually jump and commit suicide? What if?

I arrived in Buffalo early in the morning and I’m planned to leave with a friend later in the evening to Wartburg, Tennessee in Southern US to participate in The Barkley Fall Classic, a miniature version of the infamous Barkley Marathons. I had always dreamed of visiting Niagara Falls once, like millions of others. Also, when I learned about Barkley Marathons in 2011, I wanted to touch the yellow gate and experience the emotions Frozen Head State Park holds – those of hundreds of athletes who had ground themselves there, their friends and supporters, Lazarus Lake and especially those fifteen runners who finished. But, a part of me couldn’t care less about that. A part of me wants to die. Right here, right now. I’m unsure of what’s happening. I didn’t sleep last night on the bus. Am I hallucinating? Or is this what I really want? I think these voices are right and I must listen to them.

I climb up the first step of the fence and now I can see my blurred reflection in the water. And then, I climb the second step. My heart is racing. Blood is gushing in my head, my vision is getting blurred, breathing is shallowing down, my entire body is shivering, my feet are burning, palms of my hands are sweating and I’m holding the fence as tight as I can. “One more step Gaurav and you’ll succeed. This all pain and miseries would be over. Be strong and lift one more step. One step at a time.”

One step at a time. I see my entire life unfolding in my blurred vision and listen to a female voice saying the words “One step at a time”. That’s my mother’s voice. I see myself walking with her in my home, holding her hand, three nights before she died. Then I see myself fighting with her, pushing her. Then she locks me in the dark storeroom. I’m shouting from inside, threatening to kill her. I also see myself sleeping in her lap, and then she sleeps in my lap. I see them (her with my father) walking with me in hills and I’m scared of looking down at the river. I immediately hide in her arms and she hugs me tight. Safe and protected.

Suddenly, I lose the grip of the fence, the foot slips down the second step and I fall. On the ground. I’m panting, in tears and continue to watch the mist rising up in the air. I wipe my face with my sleeves as I get up and start walking slowly towards the Rainbow Bridge. I’m thinking about what just happened. I pause and take a close look around me. Everyone is excited about watching the beautiful falls, taking pictures, planning rest of their day. And here I am, looking at their faces in blank and asking myself – who am I? I tell myself “You’re strong, far stronger than anyone else. Keep the faith in yourself, in people around you, in your friends, in your family, in your courage. You can do things not many people can imagine. People look up to you to seek inspiration. Hold yourself and keep walking.”

Two weeks ago, when I recorded the podcast with Confabulation Producer, Paul Aflalo, in Montreal, that was for the first time when I realized how homesick I was. A lot had happened back at home in past. What impacted me the most, was grudge of failing to help my cousin I grew up with in saving her two-year-old son who died to cancer. Two years old. I believe, I could have done better than what I did and I could have saved him, but I didn’t. I want to go back home, hug my father, apologize to my sister and spend some time with them.

I run The Barkley Fall Classic, travel back to Montreal and decide to go back home.

However, was it just homesickness that pushed me to the verge of suicide? I wish that was. But, it wasn’t. Coming back home didn’t change things much. I was happy for first three days, but soon the dust settled and I was lost again in thoughts. I had planned at least three dozen meetings with friends and relatives before my arrival. But, I stopped showing up for most of them. I would cancel most of them on that day. I would prefer to stay locked in the home, all by myself, hooked on to the laptop reading random online stuff.

I was not running anymore. I got better at choosing my excuses for not doing the things I thought I earlier wanted to do, in order to hide my guilt of not doing it. It was not that I had lost interest in running, it was just that I didn’t feel like doing it. In my head, I’d curse myself and scream at self that I must go and run, meet friends and explore new places, but I would not. I would sleep most of the time, would feel exhausted all day and had accepted the manufactured fact that I was a failure, worthless with no future in life. This would beautifully compliment the guilt of not running anymore and the deep groove of sadness would engulf me rest of the remaining time. I didn’t realize, musturbation is bad for mental health. Must and should statement to motivate self, generate a lot of unnecessary pressure, emotional turmoil and resentfulness. When the reality of own behaviour falls short of your standards, your musts and shoulds create self-loathing, shame and guilt.

Whenever I would feel sad, I would eat. Most of the times, cookies, which means a lot of sugar. I had given up on sugar for a long time, but now when I was not running, barely getting out of the home, it started overpowering me. When we consume sugar, glucose level shoots up and we feel happy about it. Because that’s what brain wants. In a couple of hours, when blood goes down again we feel hungry despite the fact that we just had a high-calorie meal. Sugar is addictive because it pushes with positive feedback process to a new extreme. I would eat a lot, at regular intervals, would feel incredibly guilty about it, won’t exercise and then eat more again. I started to gain weight very rapidly and before I could realize, it became a major health concern.

One night, I was checking my emails and I stumbled upon an email from Matthew Waldmann. I spent three months in Kingston, Ontario as a Canoe Trip leader with one of the NGOs and Matt was my roommate there. Perhaps, the best roommate one could’ve asked for. Matt had shared a song by band Future of Forestry, that he’d play in our room on most of the evenings and I loved it. That song pushed me back to the memories of the time I spent there, all rigorous physical training we went through and the intense sessions of psychological training. In June, I was training on Mental Health First Aid as a part of our regulation training before we could go out and lead trips.

During the certification, when I was learning about different mental disorders, I had realized many of the symptoms related to depression were very familiar to me. Following that, I got in touch with one of the clinical psychologists and got to learn I was suffering from Clinical Depression. He suggested if the symptoms persist, I should better not lead the 9-14 day long canoe trips in the wilderness of Algonquin Park with 13-17-year-old youth who often come from a difficult background and personal history, and the entire experience would be highly absorbing at physical and mental levels. As per him, I was just not entirely mentally fit at that time. I thought, “I’m a runner. Runners are mentally strong that’s why they are able to accomplish what they do. I ran solo, 375 km in a country where I was less than a year old. How can I be mentally weak? That’s a rubbish finding. Psychologists are idiots.“

I never saw him again. However, that night I was reading the emails exchanged during the time I was seeing him and the follow-up emails he had written in September that I had never checked. Now, I asked myself again “Was he right? Am I actually suffering from depression? But, how?” I looked around me, but I had no one to speak with. I did speak to my brother and sister and asked if they feel I’m suffering from depression. They laughed and told me I was overthinking. I called another friend, probably one of the closest humans I have around me, and talked the same thing. The response – you’re just overthinking, you should relax.

“Maybe I’m just overthinking. Maybe she is right, this is a phase and shall pass” I told myself and dropped the call. A week later, began the great Indian Wedding season. This was an excellent opportunity to meet and greet my extended family and friends, some of them I had not met for half a decade. However, despite a strong desire to attend those, without any exception, I successfully bailed out every single evening with no honest explanation but very real excuses. By end of 2017, I was not meeting anyone anymore, was barely attending calls and ghosted out on three friends on a pre-booked weekend trip to the Himalayas.

I stopped making plans. I had no reason to go to bed. I had no reason to get up in the morning either. I would sleep hours after sunrise and get up around sunset. Some days, I would not sleep at all. The behaviour became the new normal for the family and without getting anyone to notice, the ever-inspiring, often-funny, energetic, ambitious, motivational speaker and a passionate runner with big dreams had unknowingly silenced his soul.

This site uses Akismet to reduce spam. Learn how your comment data is processed.